Paragraph is a blazing-fast, privacy-first, no-frills-attached blogging & newsletter platform. Sign up and start writing posts just like this one.

Productivity & automation tools can be powerful. I was delighted to come across a recent thread on Hacker News discussing a supercharged automation tool: Huginn. This open-source software performs automated tasks by using 'agents' to watch for 'events', and triggering 'actions' based on these events.

For example, if there's a sudden spike in discussion on Twitter with the terms "San Francisco Earthquake", Huginn can send a text to my phone. Or, if a time-sensitive flight deal is posted on one of the many deal-finding websites out there, Huginn can send me an email with the price and a link to Google Flights.

Compared to other popular automation tools (IFTTT, Zapier), Huginn has the following benefits:

I wanted to go beyond just automation and introduce some organization - I wanted all notifications to be cataloged & delivered in a centralized way. A personal Slack workspace seemed like the perfect solution for this - I can have a #flights channel for flight deals, or a #trending channel for the, er, pending San Francisco emergencies.

I also wanted all of this to be free. Huginn has pretty lax runtime resource requirements (even able to run on a Raspberry Pi, with some tweaking), so a free GCP micro tier instance was perfect for this.

Let's formalize what I specifically wanted to accomplish with Huginn. Note that this is a small subset of the things possible with Huginn - check out the project's Github for more inspiration.

I want all notifications to be sent to me via a personal Slack workspace, on different channels.

There are a few key things we need to do in order to have a successful Huginn deploy on the f1-micro (free tier) instances.

Enable and create a swap file.

f1-micro instances have 614MB of memory. This is not enough to run Huginn out of the box - doing so will cause Docker to encounter Error Code 137 (out of memory) errors. To solve this, we need to create a swap file in the VM. Note that a swapfile will decrease the performance of Huginn - if you're interested in better performance for a price, consider deploying on a better VM.

Disk-based swap is disabled by default in container-optimized OS. To enable and set the swap file every time the VM is booted, we can use a custom startup script (shown below).

Mount the Huginn MySQL database to a directory on the host.

By default, Huginn creates a MySQL database inside the container. This is problematic, as the container now relies on state, and your database will get deleted every Huginn upgrade. We can use a volume mount to mount the database in the container to a directory in the host. Alternatively, you can mount a persistent disk and write the database to it.

On the instance creation page, use the following settings:

We also need to add in a statup script. This script lets us 1) enable and turn on a swap file, and 2) change permissions of the volume mount on the host. The latter is required or MySQL won't be able to start.

After the VM is created, head to your VM's external URL (port 3000) and you should be greeted with the default Huginn login page!

I suggest reserving a static external IP for this VM, so the IP doesn't change. You can even take it a step further and associate this to a domain name - like automation.colinarms.com - for ease of access.

At a high level, Huginn relies on two key things: agents and events. Agents are things that monitor for you and create events (possibly if some criteria is met). An example agent is an RssAgent, which monitors an RSS feed for new articles. Events created by the RssAgent can be passed to a TriggerAgent, which uses some regex filter to only listen to keywords of interest; and finally it emits a formatted message, perhaps to a SlackAgent, that finally sends a message to a Slack channel.

You can imagine how this works in practice. For the flight deals usecase, for example: we can create an RssAgent for the Secret Flying RSS feed. The TriggerAgent can listen to these events, filter for "San Francisco Airport", and the SlackAgent can message my #flights channel when this happens

Multiple agents for a single usecase can be grouped into a Scenario - in the above example, a Flight Deal Scenario would make sense.

Let's walk through this example. If you want to get started immediately, you can download my agents and import them into Huginn directly.

Use the following JSON in the options:

Expected update period is the period at which Huginn should expect the agent to be updated - if it doesn't happen, the agent is considered not working.

Save your agent, and give it a manual run - you should see events populate from the underlying feed.

2) Filtering for nearby airports

Now, create a TriggerAgent. We want to filter newly posted articles for only nearby airports - in my case, San Francisco or San Jose airport.

Fill it out similar to the first agent. But, this time select your RSS Agent as this agent's source. Events from the RSS Agent will be fed into this.

Use the following JSON in the options:

We're filtering the RSS feed's title to contain my nearby airports, and emitting a message with the URL, title and a description.

Put the following JSON in the options:

Save your agent, and eventually you should begin receiving flight deals! 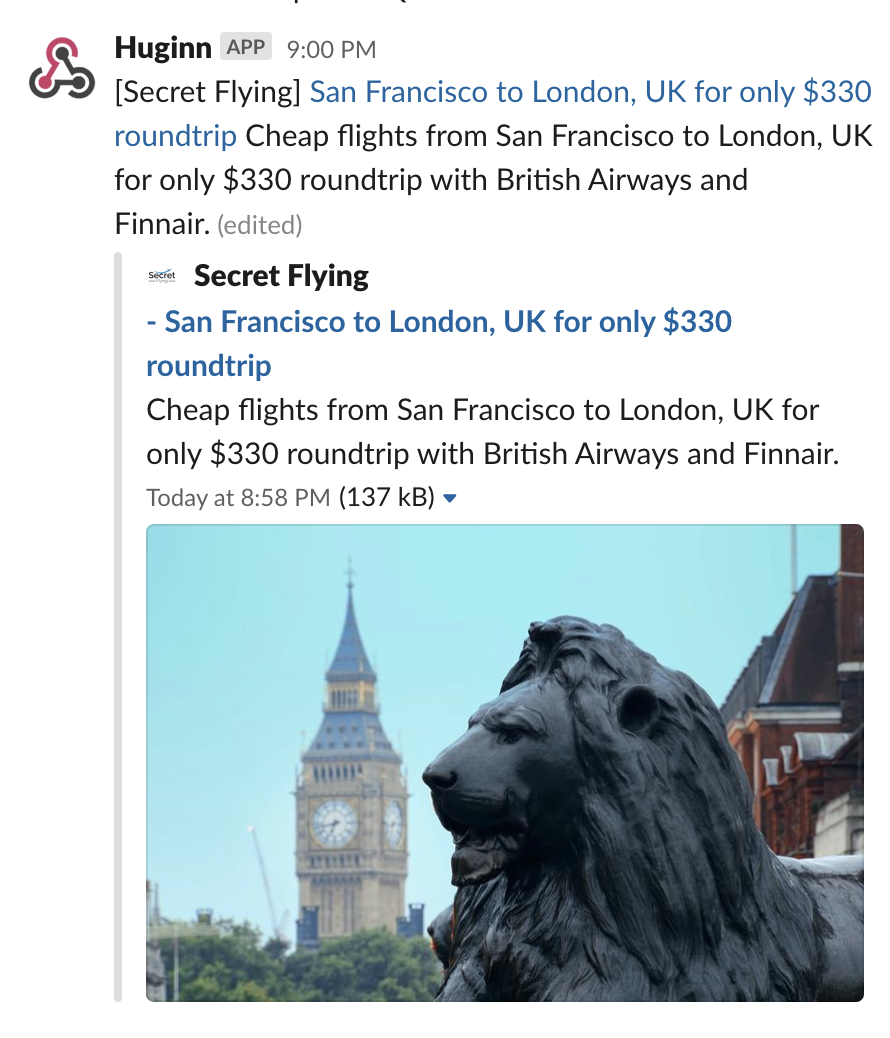 This example describes a single usecase for what's possible with Huginn. If you're interested in the other usecases I described above, you can download and import them into your own installation.

This post just scratches the surface of what's possible. With Huginn, let your Agents monitor on your behalf and free up your time for more important things.